True Giants of the Forest.

To someone who has never seen one, a Redwood tree must seem to be something from a tall tale. Averaging eight feet to as much as twenty feet in diameter, and some as tall as three hundred and seventy five feet. That is a tree taller than the Statue of Liberty, from base of the pedestal to the tip of the torch. A tree larger around and through than a Greyhound bus. A typical Redwood forest contains more biomass per square foot than ANY other area on earth, and that includes the Amazonian rain forests.

The brotherhood tree is one of the largest living things in the world. It was named in hope for the brotherhood of man. It is over 2000 years old, 19 feet in diameter, 60 feet in circumference and 297 feet tall. It is truly awe inspiring to stand next to this massive living entity and realize it was here and growing for much of recorded human history. This tree is one of the mighty sequoia sempervirens, or Coast Redwood. There is evidence on the bark of a recent (within the last 500 years) fire. The bark of these trees chars before it burns, forming an ablative shield, protecting the living tree. The area in which this tree stands was logged in the 1950s, but this magnificent specimen was spared for some unknown reason. Here it stands today in its solemn majesty. Access to the base of the tree and views of the top from a vista of about 300 feet are available. This tree stands on the Forest Experience section of the trail. 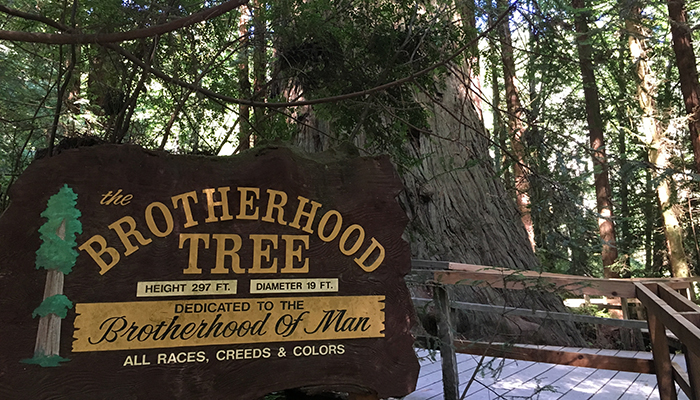 A group of nine trees growing together as one – making this the worlds largest “cathedral” tree! Approximately 800 to 1000 years ago a very large tree stood in the middle of this formation. When it fell it didn’t die. The roots and burls of the stump sprouted and these nine trees happened to grow together in a circle around the original mother tree’s stump, which has long since rotted away. This tree is the site of Easter services each year and also many, many weddings. 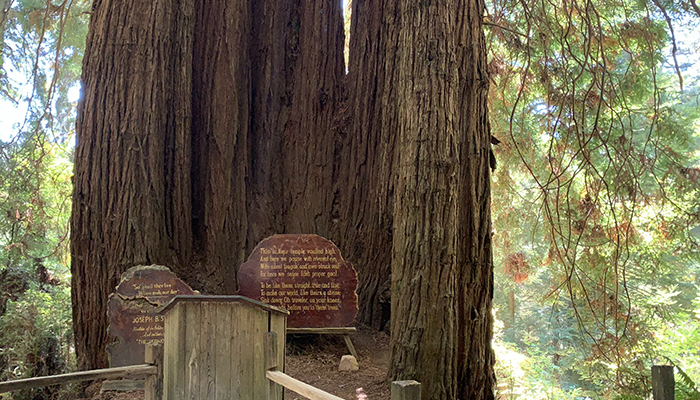 The Candelabra tree is another example of the Redwoods incredible will to survive. A fallen Redwood will commonly send shoots up as new trees and indeed this is how many trees get their starts. This one is a remarkable specimen because of the open space underneath.

There was a time when the “Elephant” might have been a little easier to see than it is now (some people have an easier time seeing an octopus). Elephant or not, the over-extended root system of this special tree exemplifies how redwoods manage to “hang on to life” despite changing terrain angles and levels of soil – they simply reach out further and make whatever “adjustment” they need to make in order to steady or right themselves and survive – showing a remarkable adaptability and flexibility in their struggle to exist. 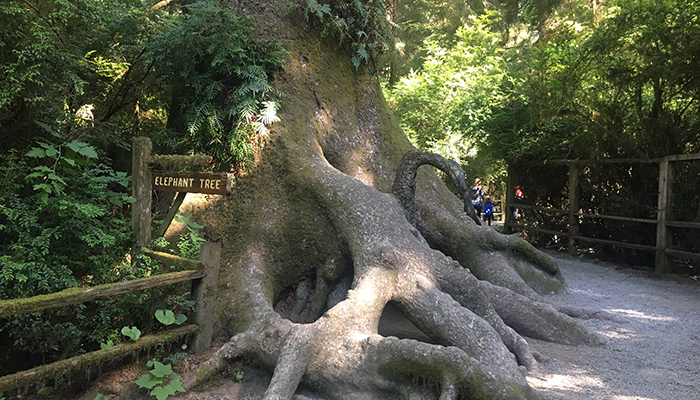 Visit Our Online Store and Buy Your Very Own Redwood Seedling.

Redwoods can grow in many places…but will not achieve the girth and height that they do in their “native” habitats. Nonetheless, they may still grow and thrive and become very sizable trees in many place over time (depending on location, care, and environment). If the prospect of experimentally growing a real live redwood of your own piques your curiosity and enthusiasm, consider buying one from our store and trying your hand at it. Only time will tell how well it will thrive and how large it may grow. 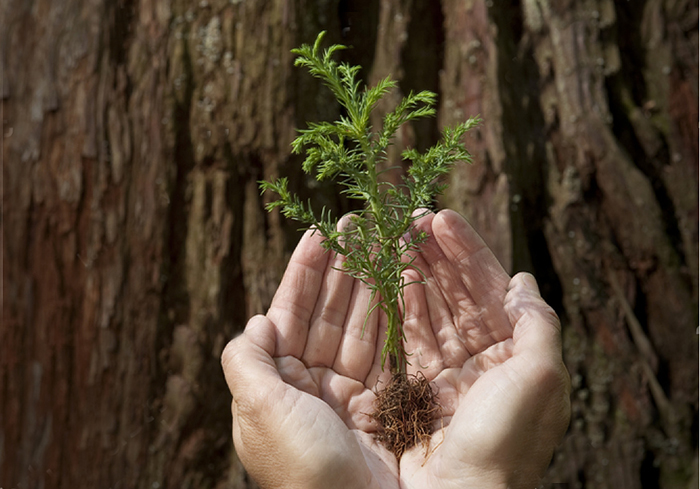 We love our Redwood Forest and sharing all that we can about it with you.  So for those of you who enjoy learning or just knowing more about everything and anything,  we’ve gathered some interesting and historical information about these spectacular trees.

The Redwoods in Prehistory.

These largest of living things are from an ancient line, and near-relatives of redwoods were present on earth at the same time as the dinosaur. Once found almost world-wide, their natural range is now restricted to the foggy coastal belt of Northern California (the sequoia sempervirens), a strip in the Sierra Nevada mountains of sequoiadendron giganteum and a small group of metasequoia (Dawn Redwood) in a remote valley in China. These are the only living forests left of a tree line that at one time spanned most of the earth.

The Role of Weather in Redwood Growth and Range.

The Coastal Redwoods thrive on, and indeed require, the heavy fogs that are normal daily occurrences along the coast. These 300 foot plus tall giants actually pull moisture into their needles at the tops of the tree where the circulation system of the tree can’t pump to. The 50-60 degree average temperature of the area are also important to the life cycle of these trees. These two conditions are limits to the modern day range of these awesome giants. They will grow about anywhere, as evidenced by photos people have sent us over the years of trees growing in such disparate places as Fresno California, Waycross Georgia, Florida and even one hardy voyager in Phoenix Arizona. But they will never attain their true size and stature without the Coastal fogs and temperatures that nurture them and at the same time keep other competing species, such as pines, stunted and sodden.

The bark of a coastal redwood is very thick, as much as a foot in places. And it exhibits an unusual property when exposed to fire – it chars into a heat shield. It actually turns into an effective ablative, similar to the way a heat shield on a re-entry vehicle works. The chemical composition of the tree itself is apparently distasteful or even poisonous to normal tree pests like termites and ants. That is why it was used as the first layer of boards in a wall, because termites and carpenter ants won’t burrow into it. In the 30’s to the early 60’s redwood was used as a separator between the plates of electrolytic (auto, truck and airplane) batteries. The wood could withstand the battery acid and still retain its shape. Redwood is very resistant to water-associated rot. It is not uncommon to drill a well in a creek bed in this area and end up drilling right through a redwood log that may have been buried there for thousands of years. The wood comes out of the pipe sound and in good shape.

A live redwood that is knocked over will attempt to continue growing via its limbs. If undisturbed, the limbs pointing up will turn into trees in their own right, and this is indeed the source of many row groups of trees.

Cathedral or family groups of trees are simply trees that have grown up from the living remains of the stump of a fallen redwood, and since they grew out of the perimeter, they are organized in a circle. If you looked at the genetic information in a cell of each of these trees, you would find that they were identical to each other and to the stump they sprang from. They are clones!

The redwood burls are another survival strategy. Their growth is held in check by the presence of chemical signals in a living redwood. If the tree should die, or even be stressed, say by low rainfall or fire, the chemical signal weakens or vanishes and the burl will burst forth into verdant life. Burls kept in a shallow pan of water will grow almost indefinitely. They can also continue on to become a full grown redwood tree. At the very least, if watered they will produce a lovely fringe of green pseudo branches and make a very interesting looking and unusual house plant.

Lastly, there is the conventional sexual reproduction system of seeds. About 20% of today’s present trees sprang from seeds. The rest came from one of the various cloning-based proliferation strategies. Genetically, it’s the same tree after each successive cloning process. 80% of the trees now growing were produced in one these cloning processes. If you connect these two facts, you will come to realize that some of those trees out there could be the last in a 20,000 or 30,000 year (or more) line of the SAME tree reproducing itself over and over again! Genetically, they are the same tree that grew from a seed all those centuries ago! Would it be proper to place the age of one of these trees as the true age of its unchanged genetic material? I don’t know, but these amazing trees are truly ever-living.

The information below was gleaned from two excellent articles on the subject of redwoods. Thanks and appreciation to the authors, Dr. Herbert G. Baker and James A. Snyder for allowing us to make them available on the internet.

The Redwood – Surviving on The Floodplains.

Coastal Redwoods have the unique ability to survive rising soil levels over their immense lifespans. Rising ground levels are commonly brought about by flood deposits, deposits that typically smother other tree root systems, killing them. The redwood simply grows a new lateral root system! Seven successive layers of roots were observed on one fallen redwood meaning that the ground level had risen dramatically up the tree seven times and each time the tree responded with a new root system. The total rise on this particular tree was 11 feet over the tree’s 1200+ year life. It has been observed that some 1000+ year old redwoods have experienced and survived rises in ground level of as much as 30 feet! Couple this with redwoods ability to survive long periods of immersion and their immense durability in the face of flood borne debris and you will realize that the redwood can survive and indeed thrive in flood planes that wipe out less hardy tree species.

Th confined to a small valley in Central China, while the Coastal Redwood exists in a narrow strip along the Northern ey are classified as three separate genera: Coastal Redwood (Sequoia sempervirens), Sierra Redwood (Sequoiadendron gigantea) and the Dawn Redwood (metasequoia or glyptostroboides) The metasequoia was first found as a fossil by a Japanese botanist in China in 1941. Later, also during World War II, living specimens were discovered in a single valley in central China. The dawn redwood is deciduous while the sempervirens and the gigantea are both evergreen.

The Dawn Redwood and the Coastal Redwood spanned the Northern Hemisphere 65 million years ago while their beginning was much earlier, in the Upper Cretaceous, about 110 million years ago. From their maximum coverage during the beginning of the Tertiary period, 65 million years ago, the Dawn Redwoods have steadily declined until the natural population ended up beingCalifornia coast. The Sierra Redwood covered the same areas as the Coastal and the Dawn and in addition, Europe, and are now living in separate small groves in narrow valleys in a small area of the Sierras.

The “Sequoia” part of Sequoia sempervirens and Sequoiadendron giganteum is in honor of the great Cherokee patriarch of the Cherokee written language, Sequoia. Several other names were used prior to settling on this most appropriate one. Other early names were “Wellingtonia” in honor of the Duke of Wellington and the very patriotic “Americus”.

Redwoods vs. Tectonics and Geology.

Redwoods compensate for induced leans caused by shifting slopes, collisions of other trees, flood pressure and tectonic induced tilting, by the unusual ability to “buttress” their undersides through accelerated growth on the downhill side. It is possible to find groves of trees all leaning in the same direction!

A couple of notable examples: One tree that gained seven feet in diameter in 108 years. There are reports of second-growth yields of 5074 board feet per acre per year.